On July 8, 2012 1 Comment
The title of this episode better not turn out to be a racial slur, or I’m going to be very upset.  At the royal palace, some snooty bitch named Edwina arrives.  Apparently, she’s King Randor’s niece and she sounds as stuck up as she looks.  I’m also pretty sure she’s a pill popper. Anyway, she insults everyone and then tries to seduce Prince Adam by asking him to escort her to her room. 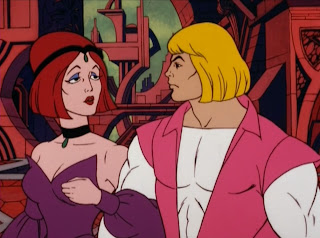 Orko has a hard on for her and so he shows up outside her door with a lame gift.  Edwina is totally rude to Orko and even calls him by the wrong name.  She’s probably pissed because Prince Adam shot her down on account of his preference for cock and all. Anyway, Prince Adam shows up and tells some bullshit story to Edwina about how Orko saved his life once as a kid because he got lost in the tar swamps. 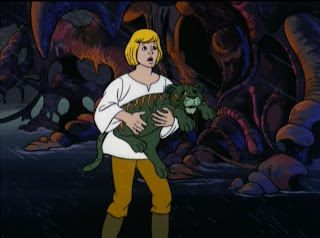 Apparently what happened is that the storm was so powerful, it tore open a portal to Orko’s dimension pulled him over to Eternia and he got stuck there.  He happened to appear at just that moment to find Prince Adam stuck in the tar.  Orko helps them out by using his magic, which he surprisingly doesn’t fuck up.  Prince Adam is lucky to be alive, really.  Orko easily could have killed him by mistake.  Especially because he rescues them by animating a terrifying giant tree hand.  It easily could have crushed them.  Or poked an eye out!  Orko shows off after he saves them and ends up losing his magic medallion in the tar swamp.  The royal family adopts him anyway.  Edwina is not impressed by the story and just rips on Orko for losing the medallion.

The next day, Man-At-Arms and Teela are looking for Orko because he missed breakfast.  He’s not in his room and his bed hasn’t been slept one so they automatically assume he went looking for the lost medallion in the tar swamp.  At the tar swamp, Orko accidentally stumbles upon Beast Man, Skeletor and Evil-Lyn, coincidentally conducting an evil plan.  They have a potion that they will be dumping into the tar swamp that will allow them to resurrect extinct ancient creatures.  This will, of course, allow him to, in turn, take over Eternia. 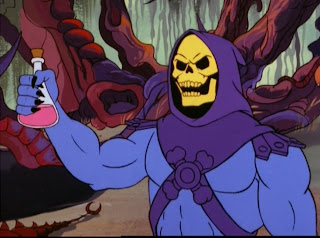 Orko tries to take off to warn everyone, but he gets himself noticed by Skeletor.  Evil-Lyn captures him and delivers him to Skeletor.  They tease and tell him what a loser he is and show him how they can summon ancient creatures that will eat him and destroy He-Man.  They make good on their threat and summon a giant dinosaur out of the tar, and Beast Man uses his mental powers to control the thing. 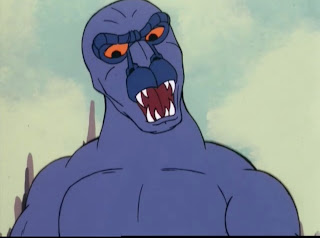 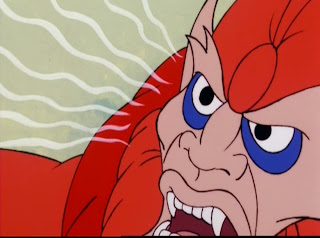 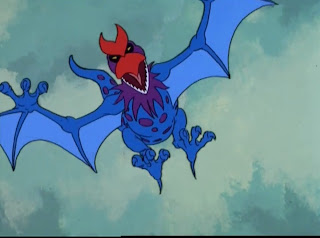 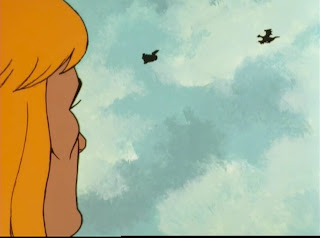 They are all standing around listing to Stratos telling them about he saved Man-At-Arms and Teela, even though everyone just fucking saw it happen, when Skeletor reveals himself and taunts them with Orko as he holds him up by his neck.  Suddenly the tar dinosaur, with Man-At-Arms calls a dragodon, rises up behind Skeletor. 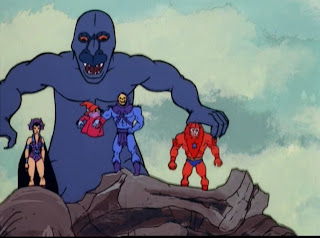 Before He-Man can make a move and slay the dragodon, one of the pterodactyl creatures swoops down, scoops him up, and flys away.  He-Man should just cut off its legs.  Easy escape.  Skeletor continues on his way to the palace, now that He-Man is out of the picture, while Stratos flies off to try and rescue He-Man.  Stratos gets the pterodactyl creature to chase him, leading it through some trees.  It gets hung up on one and drops He-Man.  I was really hoping for some dismemberment to be involved with this rescue plan.  Damn. 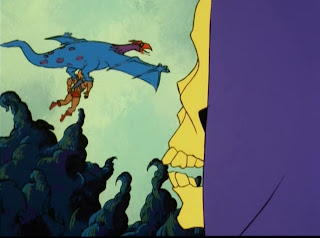 At the palace, Edwina continues to be rude and disrespectful by trying on Queen Whats-her-name’s crown when King Randor walks in on her.  She isn’t even embarrassed about it.  Instead of bitching her out, he offers to show her where the really valuable treasures are.  I’m pretty sure he’s just trying to perv into his niece’s panties.  Why am I not surprised that incest isn’t taboo in Eternia?  Well, he doesn’t get a chance anyway, because Skeletor has arrived and the dragodon is causing all kinds of structural damage by head-butting the palace wall. 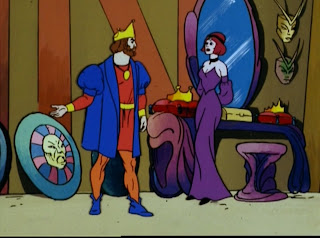 King Randor and Queen Whats-her-name go to find out what all the commotion is about, and King Randor is shocked to see the dragodon, as they have been “extinct for ages”.  Skeletor demands that King Randor surrender to him, and he does, immediately.  He doesn’t even think about it.  Skeletor instantly locks the King, Queen, Edwina and Orko in the dungeon. 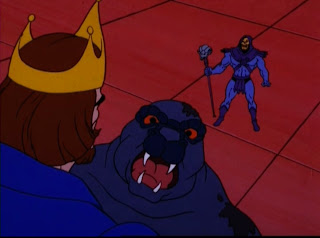 Edwina is throwing a tantrum and foolishly asks Orko to use his magic to get them out of the dungeon.  He tries to make the bars vanish, but instead teleports Edwina and himself outside while leaving the King and Queen trapped.  I guess that ended up working out for her pretty well.  Orko begs her to help him rescue the King and Queen, but she just gives him a snotty look and says, “fuck that noise, I’m going to go pop some pills and nod out watching soap operas”. 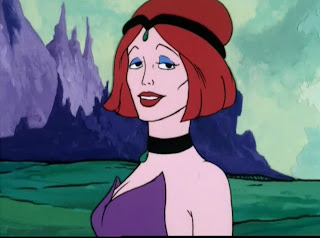 Of course, she walks smack into the dragodon.  I guess that didn’t work out so well for her after all.  He-Man shows up and pulls her out of the way while Battle Cat takes on the dragodon.  I bet Battle Cat would make a pretty tasty meal for a dragodon.  I’d like to see that.  I bet He-Man would cry like a little bitch. 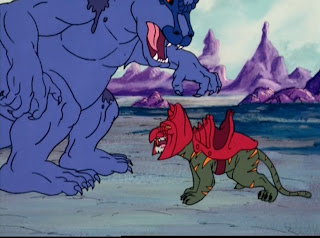 Stratos is only just arriving with Man-At-Arms and Teela, and He-Man tells him to go the castle and challenge Skeletor while he takes out the dragodon.  He-Man’s battle with him is pretty disappointing because he just punches the dragodon’s toe really hard and it runs away like a scarred little girl.  He-Man takes off after him, hopefully to murder once again.  It’s been a while since he killed, I know he’s gotta be hungry for it. 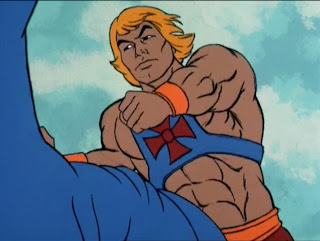 At the palace, Skeletor and Evil-Lyn are already sitting in the royal thrones, having a glass of bubbly to celebrate.  Man-At-Arms, Teela and Stratos crash the party, so Beast Man, and Evil-Lyn try to stop them.  Man-At-Arms manages to take out Beast Man while Stratos straight drops Evil-Lyn from the sky. Unfortunately, her cape catches on something saving her from splattering on the ground. 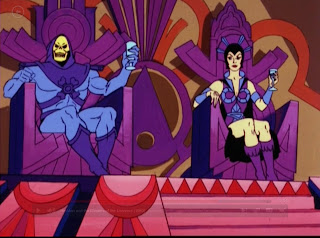 Man-At-Arms confronts Skeletor, and Skeletor actually says, “You fool, did you think I’d face you myself”?  I guess even Skeletor know’s he’s a pussy.  At that moment, the dragodon breaks through the palace wall.  As his head is stuck through the hole in the wall, He-Man and Orko show up and notice that Orko’s magic medallion just happens to be stuck on the back of the dragodon.  Wow, these writers really don’t try, do they.  Orko goes and plucks it out of the patch of tar it’s stuck in.  He-Man distracts the thing by throwing his sword at it, which unfortunately only bounces off and doesn’t even cause a laceration much less stab into its spine and paralyze it.  It does draw the dragodon’s attention, however.  He-Man continues to tussle with the dragodon while Orko is tying to think of a spell to send it back. 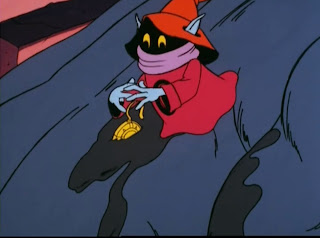 Just then Edwina shows up and is all hot for Orko all of the sudden, now that he has his medallion back.  That, and she wants to try stumping with Orko’s amputee legs.  She tries to convince him to teleport the two of them to someplace private so she can slime his stumps, while leaving everyone else in peril.  Orko’s eyes go bonkers while he thinks about it, but he snaps out of it and rejects her advances. 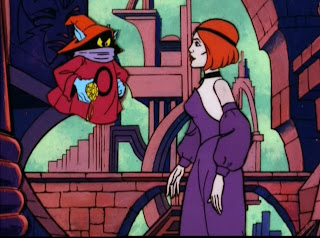 Ironically, he wishes this whole thing had never happened, and so that’s what the Medallion does, it makes it like it never happened.  The dragodon, Skeletor, Beast Man, Evil-Lyn all disappear.  In the process, the medallion reattaches itself to the tar patch on the dragodon’s back before he disappears.  Later, in the palace throne room, King Randor sits in a seat still warm from Skeletor’s ass and commends Orko for actually doing something right for once.  Excpt, it if was like it never happened, they wouldn’t fucking remember it. 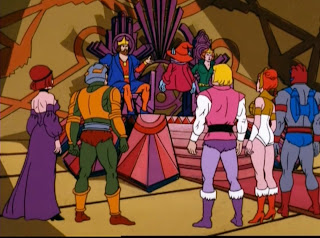 King Randor tells Edwina what a rude bitch she is, and until she gets an attitude adjustment, she’s never welcomed back.  She walks off, snooty as ever, but Orko stops her at the door.  In spite of everything, he still has the hots for her.  He gives her a present in the hopes that she still wants him to stump her, but she just acts all rude about it, having learned nothing.  As it turns out, the little piss ant is playing a prank on her.  She opens the box and a dragodon head on a spring pops out.  She runs off all scared, apparently not realizing that it was just a toy. 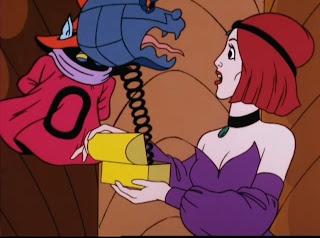 Time for this week’s moral.  It’s probably going to be about how being rude and stuck up and entitled doesn’t get you anywhere.  Which isn’t true, because then we wouldn’t have people like Paris Hilton and the Kardashians.  Fuck those bitches.  They obviously didn’t watch He-Man.  It turns out I’m wrong, and that’s not what it’s about.  Prince Adam tells us that friendship is precious and you can’t buy friends with gifts.  But, you can buy sex. 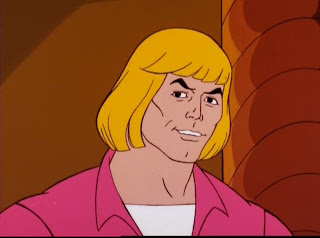