You know, I just actually bothered to look and see what the runtime was when the intro ended.  That infernal intro takes one minute and twenty-one seconds!  Every damn episode!  This episode opens with Prince Adam, Man-At-Arms and Orko trekking through a forest, looking for the city of the ancient ones. 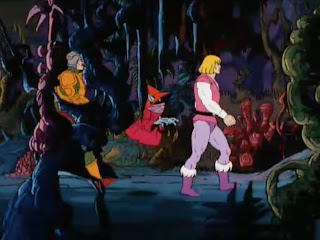 Mercifully quickly, they come upon a huge Mayan-looking city.  Orko remarks about how electric the air feels as he stretches.  I think he’s just having phantom leg pains.  Anyway, they are there to rediscover a special power and use it for the good of all.  After an avalanche of  bricks nearly crushes them all, Price Adam bothers to mention that the Sorceress said that the spirits of the elders might be haunting the place. 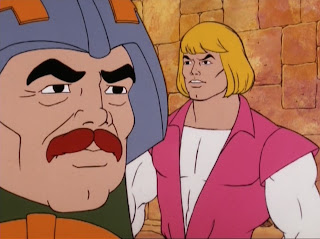 Little do they know, Skeletor has a mechanical bird surveilling them so he can steal this ancient power out from under them.  He summons Beast Man and Evil-Lyn, but instead, this dude Aran and this chick Oona appear, looking like stereotypical spaghetti-western Indians.  Skeletor is about to have them both murdered, but he notices the guy isn’t wearing a shirt and decides to hear them out. 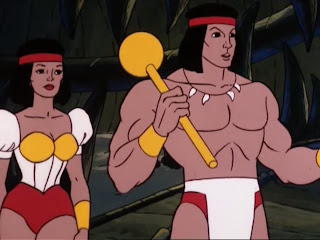 Aran tells Skeletor that he wants to use his gymnast like body to honor and serve him.  You could almost hear Skeletor’s boner rising (like a squeaky hinge) when he says it.  Skeletor decides to test them by popping a trap door open underneath them.  They fall through it and Aran uses his staff, which looks like he stole it from a brass bed frame, to catch up on some rocks and prevent he and Oona from becoming shish kabob. 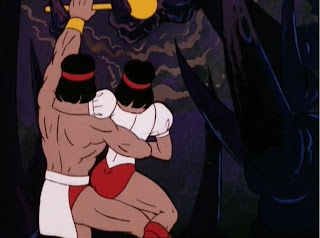 Skeletor, looking down at them in the pit, is impressed that they managed not to get impaled and asks what else they can do.  So they disappear from their precarious position and reappear back in Skeletor’s throne room.  Now Skeletor really does have a boner!  That is until he tells them to kneel, and Oona opens her yap and emasculates her man, Aran, by questioning his desire to canoodle with Skeletor.  Of course, he whacks her with that bed post staff of his and insists that working for Skeletor will bring them power and glory.  Right, because Skeletor has so many wins on his stats board.  So they kneel.  Well, Aran knelt anyway, Oona may have just been woozy. 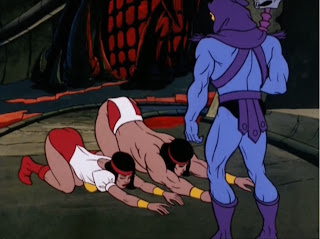 At the city of the ancient ones, Orko is hamming it up while they look for the relics.  Man-At-Arms is like, “Fuck that noise, I’m hungry”.  So he busts out his camping stove and makes some baked beans.  I kinda feel sorry for the rest of them, because I just know those beans are going to give him old man farts. 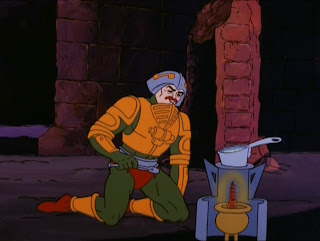 As Orko is brining Man-At-Arms some more water, the apparition of a Shriner appears in front of him.  He is so startled that he drops the pot of unfortunately not-boiling water on Man-At-Arms’ head.  Of course, nobody else saw the apparition and they all think Orko’s just taking the piss.  See what happens when you’re such a fuck up?  Nobody will take you seriously. 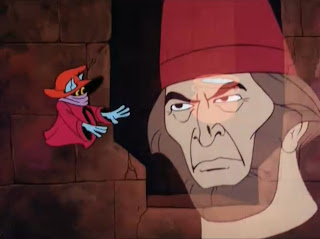 Meanwhile, Aran and Oona have arrived at the ruins, and despite earlier claiming to have only believed them a legend, somehow know exactly where the secret chamber that Prince Adam is looking for is – right beneath them.  They use their powers to lift a stone floor tile, revealing stairs leading down to the hidden chamber.  Conveniently, Prince Adam gets the funny feeling they should look outside and they discover the newly revealed chamber.  Even though there was a staircase there a moment ago, it’s now gone.  So, Prince Adam and crew slide down into the chamber on a rope. 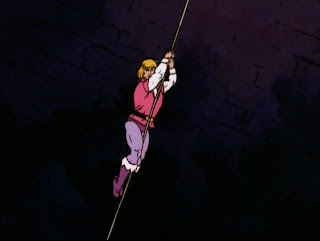 At the end of the chamber tunnel, Aran and Oona come upon the masks of power.  They are really quite creepy and have eyes that look around.  They kind of remind me of those statues from The Never Ending Story that try to blast Atreyu as he runs past them.  Prince Adam comes upon them just as they are about to put the masks on and warns that they better not.  But Jim Carry hasn’t even made Ace Ventura yet, much less The Mask, so they don’t know any better. 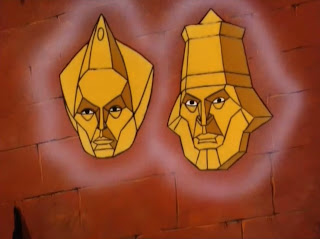 They put the masks on anyway, because it was all part of Aran’s ploy to seize Skeletor’s power for his own.  As soon as they do so, they become possessed by the spirits of the Shriner, Demos, and his witch queen, Tyrella.  Thanks to the Sorceress, Prince Adam already knew this would happen if the masks were to be worn, but, again, didn’t feel it necessary to share this information beforehand. 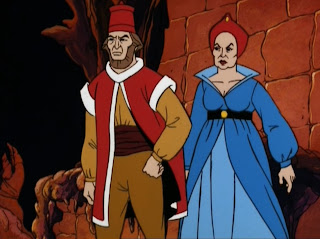 Demos immediately attempts to crush them all beneath a pile of debris – which is usually He-Man’s M.O. – but they all dodge out of the way.  Since it’s damn close to halfway through the episode, Prince Adam runs off to turn in to He-Man.  I guess he does it right in front of Demos, because his eyes get all big and bulgy.  Maybe he saw a flash of wiener when Prince Adam was changing into his He-Man clothes.

The witch queen blasts He-Man, trapping him in a glass cube, which he easily smashes with his power sword.  Demos says, “Fuck this shit, lets go get the Sword of the Ancients”, and they float up and away out of the cavern.  He-Man just stands there like a dip-shit while they escape.  He’s pretty good at letting villains get away, isn’t he? 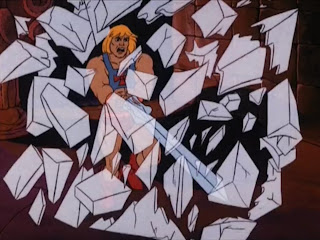 Not only do Demos and the Witch Queen trap them in the cavern on their way out, they summon a giant ogre to finish them off.  I mean like really giant.  He-Man tosses Orko up through the top of the cavern to get the rope.  He-Man continues to battle the ogre, and I’m hoping he jumps down his throat and slices his way out of the beast’s belly.  Instead, He-Man kind of just jumps and dances around the thing, and then boosts himself up to the rope, snagging Man-At-Arms, and they easily escape. 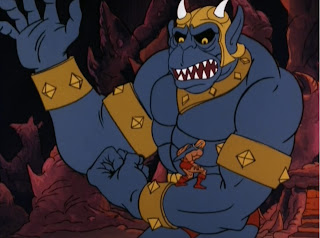 Back at Castle Grayskull, the Sorceress is explaining to them that Demos and Tyrella seek the Sword of the Ancients.  Man-At-Arms is stupid enough to say that he thought the Sword of the Ancients was just a legend while he’s standing next to the scantily clad, magical alter ego of a gay, pageboy haircut-wearing prince while in the presence of a woman that turns into a falcon. 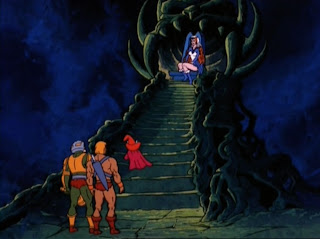 As it turns out, according to the Sorceress, the Sword of the Ancients was just a legend, and so were Demos and Tyrella, before today.  I’m not sure what she’s saying.  So legends are just coming to life all of the sudden?  Like Midnight at the Museum or something?  Weird.  Well, centuries ago, the once fabled Sword of the Ancients was stuck in a rock of solid crystal in some cave somewhere, and apparently its power is second only to He-Man’s sword. 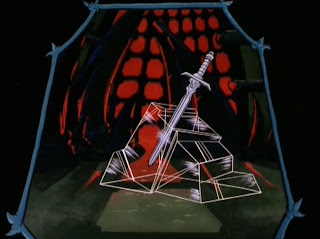 Over yonder, at Snake Mountain, Demos is barging in the front door with Tyrella as she busts his balls about who this Skeletor guy is.  She says he looks familiar, but Demos finally shuts her hen pecking down.  Now that’s interesting, Skeletor looking familiar.  This suggests that Skeletor might be ancient.  We don’t really know anything about him, and I’ve long given up hope of even the slightest thread of continuity or story arc that lasts beyond an episode with this show.  But, here we have a little hint of background on Skeletor, and I want more!  Anyway, this time Demos demands that Skeletor bow to him! 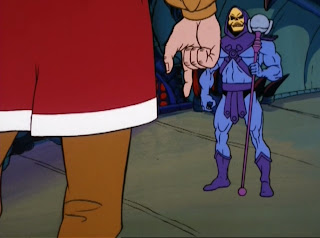 Predictably, they get into a fight.   Seems like he should have waited until he had the Sword of the Ancients to attack Skeletor, but even so, he manages to overcome him and trap him in some stalactites, but only after causing him to dive out of the way of some boulders and end up in a submissive position in front of him.  With Skeletor subdued, Demos and Tyrella take off. 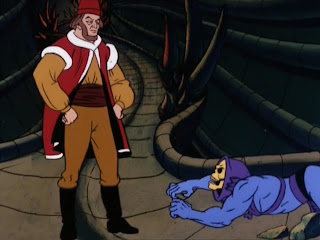 For some reason, when they should be searching for the Sword of the Ancients, He-Man and Man-At-Arms show up at Snake Mountain to discover the trapped Skeletor.  They agree to let Skeletor out if he tells them where Demos and Tyrella went, which happens to have been through a solid rock wall.  Because he’s a schmuck, He-Man actually lets Skeletor out in exchange for this nearly useless information.  That’s two villains he’s let go today.  Skeletor laughs that He-Man will never get through the 14 foot thick rock wall, but He-Man just uses the power of a recycled animation sequence to punch through it, revealing a tunnel.

After He-Man and Man-At-Arms take off to follow Demos and Tyrella, Skeletor is sitting in his skull throne, jerking off and thinking about the Sword of the Ancients and how powerful it must be.  He resolves that he must have it for himself.  I just remembered that, in the toy line, Skeletor comes packaged with a sword just like He-Man’s (but purple), and that they could join together to form one sword.  They also made kid-sized replicas of these that also joined together, which I had and loved.  I wonder if that’s what this Sword of the Ancients is?  Now my interest is really piqued – will there actually be some mythology built into this episode? 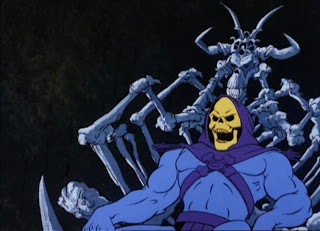 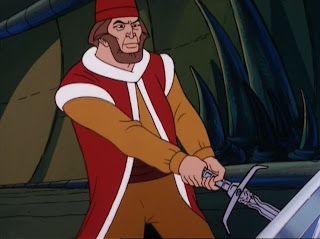 When I get another look at the sword in the crystal stone, I realize it can’t be the Skeletor doppelganger sword from the toys that I remember, because it obviously doesn’t look like He-Man’s sword.  Damn, now I want to know what that bizarro He-Man sword is all about.  He-Man traverses a few other tribulations as he approaches Demos, arrives,  shoves him out of the way and easily removes the sword from the crystal boulder. 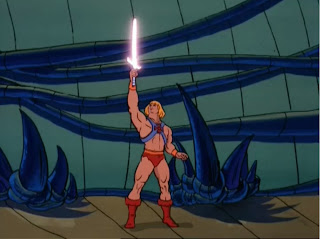 He holds it aloft just like he does his own sword, and it starts speaking, “I am the Sword of the Ancients, and I have awakened to battle for freedom and justice, once more”!  Skeletor shows up, and oh, snap, he has He-Man’s sword!  He-Man has got to be fucked now! 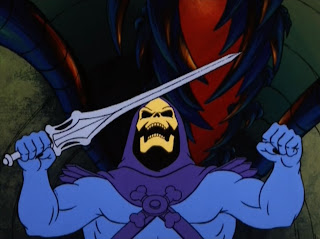 Suddenly the Sword of the Ancients flies up in the air of its own accord and says, “it was foretold that I would join with another mighty sword, and that one has now appeared”.  I spoke to soon, it is the doppelganger sword!  Now I’m the one with the boner.  He-Man’s power sword flies out of Skeletor’s hand to copulate with the Sword of the Ancients, and the two become one.

Joined in coitus, the now singular sword falls back into He-Man’s grasp, instantly causing the masks of power to lose power, thus returning Demos and Tyrella to their non-possessed state of being: Aran and Oona.  Some sad music comes on as the two lament that they flirted with the forces of evil, and they vow to be good from now on.  He-Man moves to subdue Skeletor, but he opens a portal and high tails it out of there.  Once Skeletor is gone, not only does He-Man not punish Aran and Oona, he offers them a ride home.  That actually makes sense, because I guess Aran must look pretty tasty to He-Man, and Man-At-Arms appears to be having dirty thoughts about Oona. 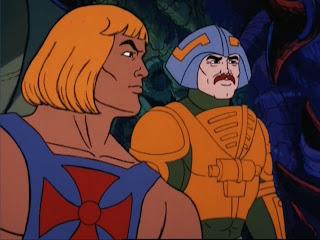 Time for this week’s moral!  I think it’s going to be about how you shouldn’t call an episode “Masks of Power” when its really about the Sword of the Ancients which assimilates with He-Man’s sword, but then only to abandon any further plot development on the matter.  Is He-Man’s sword more powerful now?  Can it be split back in two?  Seriously, there is no closure about what happened with the sword at all.  He-Man didn’t even use the sword after it merged with its other.  I guess it actually didn’t turn out to be the doppelganger sword after all.  Or maybe it was, I don’t fucking know.  What a fucking let down. 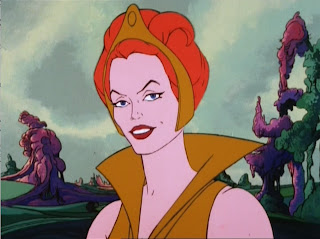 One Response to Season 1 Episode 11 “Masks of Power”